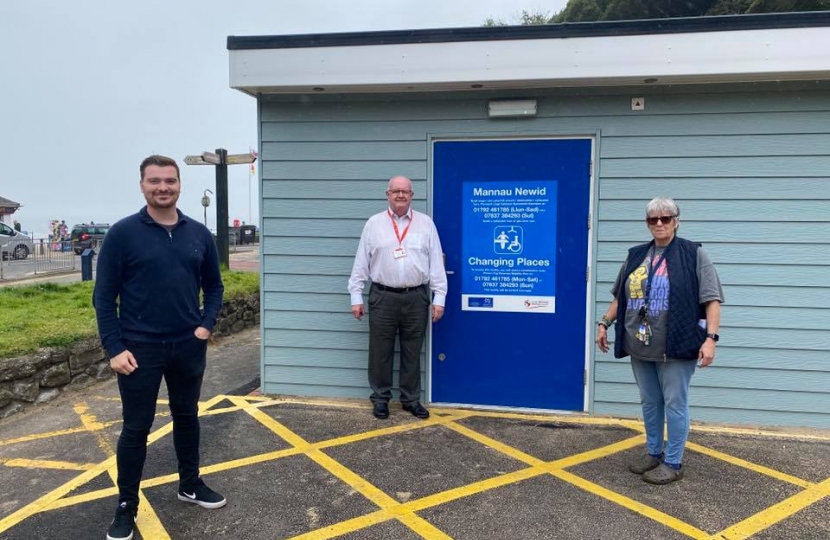 “The Changing Places facility in Caswell Bay has made a huge difference to the lives of disabled people since it opened in September last year,” said Cllr. Lyndon Jones and Councillor Myles Langstone (Leader & Deputy Leader of the Conservative Group on the City & County of Swansea Council), on a visit to the facility last Friday with Suzanne Morrison, who was the driving force behind this project.

“This facility, which include hoists, changing benches and space for carers, makes the beach a more accessible destination for people with disabilities and was a first for Wales and has been well used since I attended the opening,” said Cllr. Jones.

“However, the provision of these facilities needs to be extended, so that all public spaces should cater for people with disabilities, which would go a long way to eradicate health inequalities.”

“We were therefore pleased to hear that Changing Places will be made compulsory for new public buildings in England from 2021 and money has been made available to step up the installation of Changing Places in existing premises. This is a major step in the right direction.”

“Sadly, the Welsh Labour Government is once again lagging behind, so we would encourage them to follow the UK Conservatives example, which would go a long way to improving the lives of disabled people.”

The calls by the Swansea Council Conservative Group have also been echoed by Welsh Conservative MS, Andrew RT Davies, who is the Shadow Minister for Health and Social Services in the Senedd.

“Introducing compulsory Changing Places in new public buildings in Wales would be a major step in reducing the health inequalities that exist in our country.

"Nobody with a disability should have to suffer discomfort, embarrassment, or even injury without access to a Changing Place – and in 21st century Wales that’s frankly unforgiveable.

“Sadly, the Welsh Labour government is again lagging behind on this issue and ministers are letting down disabled people.

“It’s imperative this life-changing policy is implemented across Wales immediately.”

Our plan for defence